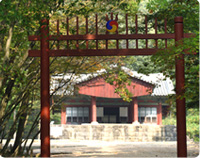 This is the tomb of the royal concubine Subi (綬妃, 1770-1822) from the Bak family. She was a royal concubine of the 22nd King Jeongjo of the Joseon Dynasty. Subi, from the Bak family, delivered Prince Sunjo in 1790. She was gentle, well-behaved and courteous. She was also usually taciturn and lived simply. As a result, she was greatly admired as “a benevolent wife (賢嬪)”. In 1855 (the 6th year of King Cheoljong), when the Illeung, the royal tomb of King Sunjo, was moved to another location, the hwigyeongwon was moved to the Sungangwon. In the 14th year of King Cheoljong, it was moved again to the current place because the location of the Sungangwon was reportedly not good, according to the Feng Shui. The ancestral tablet is enshrined in the Chilgung (the place where ancestral tablets of seven royal concubines are enshrined. All of them were birth mothers of kings of the Joseon Dynasty or those who received the posthumous title of king). She received a posthumous title of Subi (綏妃) in the 5th year of the Gwangmu (1901).

This is the tomb of the royal concubine Yeongbin (寧嬪, 1669-1735) from the Gim family. She was a royal concubine of the 19th King Sukjong of the Joseon Dynasty. When Queen Inhyeon was dethroned by Janghuibin (concubine from the Jang family), Yeongbin was also evicted to her maiden home. When Queen Inhyeon was restored, she returned to the palace with the queen. Around the tomb of Yeongbin, several stone figures can be seen standing to show her sincere respect. On the gravestone standing in front of the mound, a history of Yeongbin’s life is carved in detail.